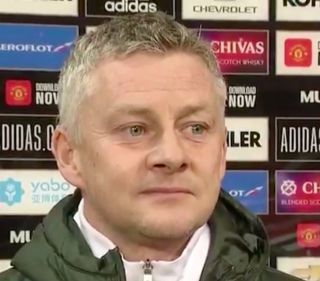 Ole Gunnar Solskjaer has explained the rotation to his Manchester United side to face West Ham in the FA Cup fifth round this evening.

The United boss has made six changes to the side that drew 3-3 with Everton in the Premier League on Saturday.

Solskjaer added that Bruno Fernandes and Edinson Cavani have both been afforded rests this evening ahead of Sunday’s Premier League fixture against West Brom but both could be utilised from the bench.

Donny van de Beek instead gets his chance in an advanced midfield role while Marcus Rashford and Anthony Martial both reach the 250 United appearance milestone in attack.

A strong United bench also includes new signing Amad after the teenager impressed with a hat-trick of assists and a goal for the U23’s in the 6-4 victory over Blackburn on Friday night at Leigh Sports Village.

Listen to Solskjaer’s pre-match thoughts below. Footage courtesy of MUTV:

💬 Time to hear from Ole on: