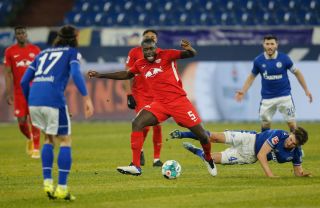 Every man and his dog thinks Manchester United need a new centre-back in the summer and RB Leipzig’s Dayot Upamecano has been heavily linked as a transfer target.

Back in August 2020 a report from ESPN suggested that Ole Gunnar Solskjaer was targeting a move for Upamecano – published shortly after Donny Van de Beek joined from Ajax. United didn’t sign a centre-back in the summer and I hope they don’t make the same mistake two years running.

Whatever you think about our captain, Harry Maguire, there’s a lot to be said about him not knowing from one week to the next who he’ll be partnered by, and I really don’t think that does the goalkeeper any favours either.

Victor Lindelof is not a good match for Maguire and Eric Bailly is nowhere near reliable enough. If the Ivorian could stay fit United’s problems at the back wouldn’t be so magnified.

Would Upamecano make the difference so many people on Twitter think he would? The jury is out, there’s is no denying this is the real world and not a video game like FIFA or Football Manager, but I am hoping the club has a busy scouting network on red alert for a top defender.

German reporter Christian Falk rained on United’s parade this afternoon by revealing that the club has no chance of signing the French centre-back this summer.

In a separate tweet, however, Falk claims Bayern Munich, Liverpool and Chelsea are all involved in a race to sign the player.

True ✅ the decision of Dayot Upamecano is only between FC Bayern, Liverpool and Chelsea now @FCBayern @LFC @ChelseaFC

Hopefully it’s a matter of Solskjaer identifying other players who fit the role better — keeping in mind that whoever comes in must aid Maguire’s game to ensure both defenders flourish at United. We’ve seen the full-backs kick on this season but there’s still a lot of work to be done.

Moreover, I was never under the impression that United would sign Upamecano this summer because he seems to be heading to Bayern Munich, like so many top Bundesliga players tend to do. It’s up to Liverpool and Chelsea if they want to waste their time on him.

For years people called for Mats Hummels and I don’t think that would’ve been a sensible buy for United. I’d fancy my slow self in a 3-way sprint against Maguire and Hummels.

Read more: David Beckham is investing £11.2m into Inter Miami ahead of second season in MLS