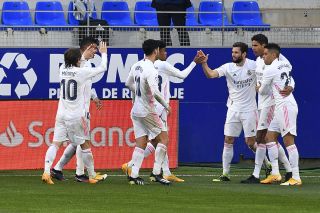 Raphael Varane could decide against extending his stay at Real Madrid. A situation that could turn in Manchester United’s favour.

It wouldn’t be a bad idea for Manchester United to keep a close eye on the developing situation regarding Real Madeid defender Raphael Varane’s contract, according to reports.

Fellow Real Madrid centre-back Sergio Ramos has also been tipped to walk away on a free transfer at the end of the season, so it looks like the Spanish giants will have a busy summer ahead of them.

The Frenchman, however, remains under contract at the Bernabeu until 2022. If he refuses to sign a new deal, Real Madrid will need to weigh up the prospect of cashing inon their man during the summer.

Spanish publication Marca reckon Real Madrid could accept a fee as low as £43m for Varane, which would represent excellent value for a world-class centre-back – even in a transfer market hindered massively by the global pandemic.

The report claims that R. Madrid are well aware of United’s interest, but could look to doing business with PSG instead because they want to build a positive trading relationship before Kylian Mbappe’s time comes to leave Paris.

Keep an eye on Raphael Varane contract situation… another issue to resolve for Real Madrid 👇🏻 https://t.co/Ql4jUMUWgv

Does Varane wish to move on or does he want to stay at Madrid where he is likely to become captain?

Varane would be a super addition at United but anything could happen between now and the end of the season. United won’t like being used by a Real Madrid player trying to get a bigger deal, so it will be interesting to see how this plans out.