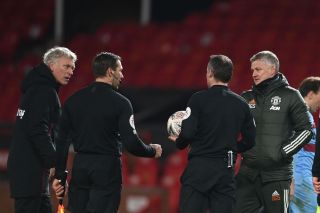 Manchester United were far from inspiring in their FA Cup fifth round victory over West Ham but they did equal a record spanning almost a century.

It’s the seventh quarter-final United have reached under Solskjaer’s tutelage and the Norwegian boss will be pleased to have progressed having made six changes against David Moyes’ resilient but unambitious Hammers.

As per OptaJoe, United’s victory now means the club have won their last nine FA Cup matches at Old Trafford, their joint-longest home winning run in the competition.

That equals their previous record of nine wins over a four-year period between 1908-1912.

United can break that 108-year record if they receive a home tie for the quarter-final and the draw will precede Chelsea’s fixture away to Barnsley on Thursday.

The quarter-finals will be played around the weekend of March 20 but the Reds have plenty of other games to prioritise before focusing on their last eight opponents.

The Reds take on West Brom away in the Premier League on Sunday and face Real Sociedad at Juventus’ Allianz Stadium in the first-leg of their Europa League round-of-32 clash next Tuesday.