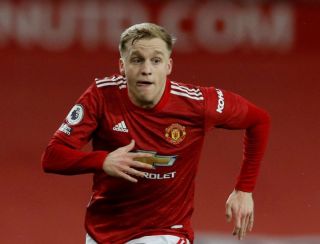 Manchester United came up against David Moyes’ high flying Hammers in the 5th round of the FA Cup tonight at Old Trafford. The Red Devils needed extra time to beat a dogged West Ham side that defended compactly throughout the 120 minutes limiting United to a handful of chances.

The increasingly influential Scott McTominay came off the bench to score his 7th goal of the season as United progress to the quarter-finals of the FA Cup with a 1-0 win for the seventh consecutive season.

Manchester United manager Ole Gunnar Solskjaer rotated his squad resting key player Bruno Fernandes, with Dutch midfielder Donny van de Beek getting an opportunity to impress as he was handed a rare start. The player in focus tonight is the Dutch midfielder who has been used sparingly this season since his £35 million move from Ajax last summer.

Van de Beek will be hoping for a run of games now with star midfielder Paul Pogba ruled out for a number of weeks after sustaining a thigh injury in the 3-3 draw against Everton in the Premier League. The Dutchman started in his preferred no. 10 position with Fred and Matic in a double pivot in central midfield providing protection and allowing him more time on the ball. However, he failed to make an impact in the first half against the Hammers as they played two banks of four restricting space between the lines. Van de Beek had a good opportunity to break the deadlock in the first half when he connected with Alex Telles cross before his goal bound shot was excellently blocked by West Ham defender Craig Dawson.

West Ham started the second half well, gaining more possession and control of the game which limited van de Beek’s ability to get on the ball. Van de Beek once again failed to make an impact on the game and was substituted after 73 minutes, getting replaced by Bruno Fernandes. Overall, the Dutch man only had a disappointing 45 touches in 73 minutes as he continues to be a peripheral player under Solskjaer.

Despite another lacklustre performance from Donny van de Beek there is no questioning his talent as he showcased during his career at Ajax. It remains to be seen if the 23-year-old will be a success in Manchester but with Pogba out injured and the games coming thick and fast, hopefully van de Beek can get a run of games in order to unleash his true potential at the club.