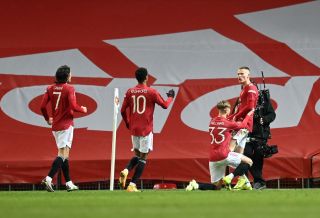 Manchester United are through to the FA Cup quarter-finals but needed extra-time to do so with Scott McTominay’s moment of quality ultimately separating the sides.

United were far from their fluid and free-flowing best, but in a knockout competition the result is all that matters.

West Ham, managed by former United boss David Moyes, ultimately paid for their negative approach but the Reds kept alive hopes of a first trophy under Ole Gunnar Solskjaer with a 97th-minute winner from the boot of the substitute Scot.

The Reds now await their fate to see who we face next in the world’s oldest knockout cup competition but were ultimately good value for their victory in a tie that won’t live long in the memory.

Here are three things we picked up on during the match..

Seven up for Solskjaer’s United

Even in the relatively mundane surrounding of a fifth-round tie largely lacking in quality, United were still able to set a club record.

For the seventh consecutive season, the Reds will play in the quarter-finals – that’s every campaign since the ill-fated error of the Moyes campaign and something we have never done before. We have only won it once in that time – that memorable winner from Jesse Lingard in the 2016 final win over Palace. Lingard, now on loan in east London, watched on from the stands as his new side beat his former one to extend the Reds fine recent record on the road to Wembley.

It’s the first time we’ve got to the last eight this many times in a row and, as is our proverbial won’t, we did so by making life as hard for ourselves as possible. None of that matters though, as the twelve time winners moved to within one game of Wembley as we look to lift our semi-final curse and break our trophy drought.

United struggled for fluency and needed until the 97th minute to finally break through the massed ranks of the West Ham rearguard but, much like your local train service, after the longest of waits, got there in the end.

Much ado about Donny…

Bruno Fernandes was named on the bench as Solskjaer shuffled his pack to give another chance to his summer signing Donny van de Beek. Again, though, the Dutchman simply failed to convince and looked a broken man when he was hooked after an hour.

Maybe it’s because he’s so schooled in the “Ajax way” that he can’t adapt to the nuances of our harum scarum English game, or maybe it’s because we expect him to be something he simply will never be. Perhaps he simply isn’t good enough. Whatever the reason, on this evidence it’s not hard to see why he’s so starved of game time. He’s unlucky in that the presence of a world playmaker, one of the best in the business in Fernandes, has kept him out the side but on the rare occasion he’s had a chance he has failed to grasp it.

Everything’s very safe with Van de Beek – a five-yard pass here, a sideways shuffle there. It provides Solskjaer with a degree of vindication and an answer questioning why VdB doesn’t play more. It appears Solskjaer struggles to trust him. Fernandes has been so impactful that anyone would struggle to displace him and live up to the same billing, but I simply cannot see what van de Beek is supposed to be and what he’s supposed to offer.

Scott McTominay has been a divisive figure – even derided by some – but this game only served to further highlight his growing impact on this Manchester United side. As Fred and Nemanja Matic toiled in vain, McTominay came on to break the lines and quicken the tempo in midfield. For a man seen as teacher’s pet, picked seemingly merely because of Jose Mourinho’s weird obsession with tall players, for a supposed outcast, McTominay has had the season of his life and scored here for the third time in as many games.

This was his seventh goal of the season, but not one in keeping with the contest as he broke the deadlock with a strike reminiscent of a prime Paul Scholes, arriving in the box at just the right moment to slam home beyond Lukasz Fabianski. He scored against Everton with a header at the weekend, and his goal here was similar to his double against Leeds – such moments are quickly becoming his trademark.

The Lancaster-born midfielder is having the best season of his fledgling career and looks a contender for our Sir Matt Busby Player of the Year award, along with Luke Shaw and Fernandes. McTominay has become a key cog for Solskjaer’s United and has continued to come of age before our eyes.

In the words of my Stretty News colleague and McTominay fanboy Brian Murphy, this lad’s not half bad and a future Ballon D’Or winner to boot.