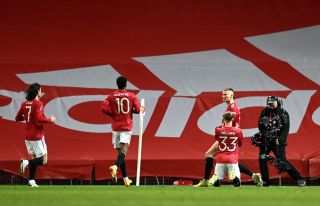 Little to do but his limited work was done well. Should be the start of a regular run of games for the England international. 6

Nearly scored comical own goal and beaten by Tomáš Souček on the flank. Substituted as Brandon Williams was given a rare run out in extra time. 5

Despite the clean sheet over 120 minutes, Maguire’s partnership with Lindelof does not breed confidence. He was beaten on occasion and loose in possession. 6

Header from Telles’ corner was brilliantly saved by Fabianski. Provided solid enough base against unambitious Hammers. 6

Close to assisting Martial and Lindelof but his attacking influence diminished after the break. 6

Defensively minded pivot of Matic and Fred was not essential against stubborn opposition and United suffered from lack of extra creative presence for large periods. He offered good protection for back four but United lacked pace in transition. 5

Distinct lack of penetration from deep and the Brazilian seldom found Van de Beek or his three forwards in space. Must practice shooting from range or resort to alternatives. 4

Ineffective and unsurprisingly substituted. Could have dropped deeper and demanded possession more but his influence cannot be compared to Fernandes in same role. 4

Plenty of dangerous runs ended in the forward being upended. His left-footed shot was United’s best chance in normal time. Lovely lay-off for McTominay’s goal. 5

Bright and displayed best moment of quality in first-half with silky skill. Influence wained in the second-half but unfortunate to be brought off while Rashford was left on. 6

Showed bravery with defensive header but does not possess the same nous and pressing ability leading the line as Edinson Cavani. 5

Classy finish for his seventh goal of the season. 7

Good movement and work rate but a chance didn’t fall. 6

Arrival afforded Wan-Bissaka a rest and made a great tackle at the death. 6