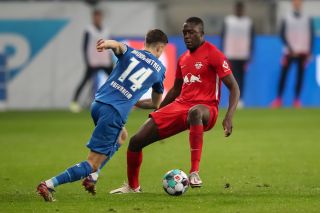 Exciting swashbuckling football going forward, timid nervous naive defending at the back. This sort of sums up how this season is going at the moment, when United are good they are very good, but they do tend to shoot themselves in the foot.

I don’t think United will win the Premier League this season (although I do hope I am wrong in this) but I do see the progression under Ole Gunner Solskjaer. I don’t think United are that far away from being a team capable of challenging both domestically and in Europe, so I will look at how Solskjaer can fix the defence so United can win trophies.

United’s performance against Everton once again highlighted the need for pace at the back against certain teams, Lindelof and Maguire are effective against teams who don’t have quick players to run into the space behind them or into the channels when the full backs go forward.

Dayot Upamecano is a name that is always linked to a move away from RB Leipzig but it’s not only Manchester United linked but Liverpool and Bayern Munich who are strongly linked and I do think he will end up landing in Bavaria this summer as the latest big name to go to Bayern.

He would ideally fit the mould of the kind of centre half United need in someone who is comfortable with the ball at his feet, reads the game well and is very quick. Jules Kounde of Sevilla is also a player who I would most certainly look at as I think he might be a better fit with all of the same attributes as Upamecano but with more recovery pace. Also, worth keeping an eye on Ibrahima Konate from RB Leipzig also would be a great defender to buy as well as David Carmo at Braga.

Axel Tuanzebe and Eric Bailly both have the attributes needed to be the defender that United need but both have issues stopping them cementing their place in the team be it injuries or bad form.

Decide on a Goalkeeper

Solskjaer has a big decision to make as what to do with David de Gea. Does he keep the faith or give Dean Henderson a run to see if he can become long term number 1.

De Gea has been United’s goalkeeper for almost a decade now but is his time coming to an end? He has made numerous errors contributing to goals in the last two/three years and fans including myself are asking if it’s time to look at other options.

Henderson deserves a run in the side as we need to see if he has what it takes to become number 1 or will the fact De Gea recently signed a new contract making him the highest paid goalkeeper in the world become an albatross for United and Ole if they want to try to move him on or drop him from the team.

A big problem United’s defence do have regardless of who is playing in the back four is that De Gea is a line goalkeeper who is a superb shot stopper but not a sweeper keeper like most goalies in the league are now. He doesn’t come for crosses and is slow and timid to come off his line at times and this can spread uncertainty throughout the defence, especially as he is not the most vocal of goalkeepers so it can result in mistakes as defenders don’t know if he is coming for a ball or they have to deal with it and can results in errors. Henderson is a vocal goalkeeper who comes off his line and is very brave but not the best with the ball at his feet, but he is young and can be coached to be better or United/Henderson might adapt their game a little to cover this.

United once built an aura around scoring late goals in that it became inevitable, they knew they would score and opposition players/fans and neutrals all knew it. Sadly, this has become the case for United in terms of their defence, they don’t look like they won’t concede and the players and fans know it too. It has almost become a self-fulfilling prophecy that if United concede a set piece or are put under pressure then they will concede and Ole has to fix this otherwise it will keep happening.

How does signing a player in these postions affect United’s defence? Well take right winger and if United land Jadon Sancho or Amad Traore/Facundo Pellistri breakthrough then it takes a lot of pressure off the defence.

As of right now United are clearly unbalanced on the right-hand side of the team, Mason Greenwood is doing a good job but is not a winger and Marcus Rashford does a job there but is more comfortable on the left-hand side.

If United had a natural winger then it would stop the team being unbalanced plus take the workload off the Right Back. Aaron Wan-Bissaka has been a lot better going forward but he is covering lots of ground on that flank and is out of position a lot as he is at times the sole attacking outlet on that side. Having a winger there would allow him to pick his moments to get forward and also make him better offensively because he wouldn’t have to be responsible for both attack and defence on the right-hand side.

Now a mobile defensive midfielder comes in the summer as it has to then it would also take lots of pressure off the defence by having someone who can cover the spaces in which the full backs leave but also stop attacks before they develop. Thus, allowing the defence to be less exposed and to give more solidity to the team. Denis Zakaria would be my preferred choice from Borussia Monchengladbach but also Yves Bissouma would also be a great signing as well as young Brazilian Gustavo Assunção from Famalicao in Portugal who United are reportedly keeping tabs on.

If you ask for one thing every manager would love to have apart from an unlimited budget is for time on the training ground to coach and drill their players on their tactics. People always wonder how managers who come into team who only play one game a week get their ideas across so quickly and it’s because they have several days to train and work on tactics.

The bigger clubs have less time as they play more games but have bigger squads and more money to buy better players so don’t feel too sorry for them. Unfortunately, most of the week is spent either travelling or recovering from the previous game ahead of the next game in 3- or 4-days’ time.

This means Solskjaer doesn’t have as much time as he would like to train and coach his defence on set pieces and in general to get them as compact and tough to score against as he would like.

Also, if he could bring in a younger more tactically astute coach to help with the tactical side of the game as well as new methods for training similar to when Sir Alex Ferguson brought in Carlos Queiroz in 2002 and brought him back after his spell as Real Madrid Manager in 2004.

These are just few things that Ole Gunner Solskjaer can do to fix the defensive problems and then next season we might see the benefits and challenge for major honours.