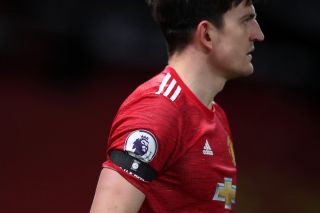 Manchester United captain and the BBC’s ‘Man of the Match’ Harry Maguire has spoken following his side’s 1-0 win over West Ham United in the FA Cup’s Fifth Round.

United edged their way past David Moyes’ Hammers in what was largely a drab and dull affair.

Despite being named on the bench, new signing Amad Diallo failed to make his long-awaited debut, however, thankfully, it turned out the exciting youngster wasn’t needed.

An extra-time winner from midfielder Scott McTominay was enough to send the Red Devils through to their fourth consecutive quarter-final.

Speaking after the match, skipper Maguire took the time to hail his team-mate’s ‘great spirit’ to bounce back with a win following a disappointing 3-3 draw in the Premier League against Everton last weekend.

“I thought the performance was good,” Maguire said (as quoted by MEN). “We could have been a bit more clinical.

“They had a spell but we dealt with it a lot better than at the weekend and we felt we got the win we deserved in end.

“Last Saturday was tough – especially in the second half. We were so disappointed with conceding with the last kick.

“We showed great spirit and a good mentality to come back and perform. We know it’s a long season and tonight was perfect. It’s important to get through.”

In light of tonight’s win, United are now one step closer to lifting some much needed silverware; something they have failed to do since Jose Mourinho guided the side to the Europa League in 2017.

Ole Gunnar Solskjaer will now be preparing his side for a league clash against West Brom when the two teams meet at the Hawthornes on Valentine’s Day.