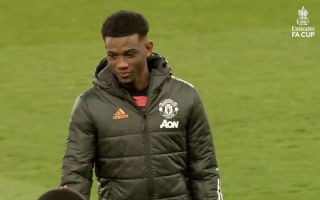 Manchester United fans have had their first look at new-signing and wonderkid Amad Diallo warming up on the famous Old Trafford turf ahead of their FA Cup clash against West Ham.

Ole Gunnar Solskjaer will be desperate to get back to winning ways as he looks to make the FA Cup’s quarter-finals.

Ahead of the exciting encounter which is scheduled to kick-off at 7.30pm (UK time), Solskjaer has named a strong starting side with youngster Diallo named as a substitute.

Depending on how the match plays out, fans could be treated to a first-team debut from the highly-rated attacker, but in the meantime, check out how he looks warming up below.