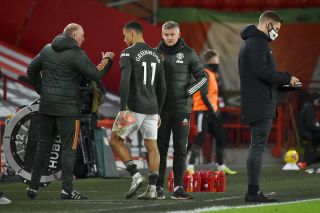 The academy graduate has long looked one of the most promising young players in the country, but you could say he has struggled to score goals like he did last term.

Still, the manager remains a big fan of the 19-year-old, who has made an impact on the players around him despite not scoring goals consistently.

Tonight United take on West Ham in the FA Cup fifth-round and there should be a place in the starting line-up for Greenwood.

“Mason was different class,” Solskjaer said (via Manchester Evening News). “I thought he was the standard performer on the pitch, he just didn’t get a goal that his performance deserves.

“He’s working with some of the top forwards in the country, of course. He’s learning off them and it’s exciting to see that he’s come over his blip and he’s playing really, really well.”

I think Greenwood needs to be playing more often.

Last season we got a taste of first-team action and played quite a few games, but I believe he will overcome this spell of not scoring as much goals in the near future. Playing more games could act as a form of medicine for the young star.

And in terms of goals both Anthony Martial and Marcus Rashford could do with scoring more.

Edinson Cavani is likely to lead the line between now and the end of the season unless he picks up any injuries and niggles.