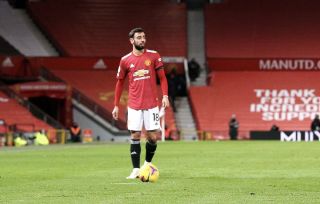 Manchester United are reportedly trying to get midfielder Bruno Fernandes to commit to a new contract, however, worryingly, the Portuguese superstar appears to be stalling.

Fernandes, 26, joined United a little over 12-months ago after making a January switch from Liga NOS side Sporting Lisbon.

Since his arrival in Manchester, the world-class midfielder’s on-field impact cannot be underestimated.

After being directly involved in a remarkable 22 goals in 22 Premier League starts, the 26-year-old has found himself in the race to win the 2020-21 golden boot.

Fernandes’ awe-inspiring performances have seen him become a fan-favourite as well as draw comparisons to the likes of Eric Cantona.

However, fans may be worried to read a recent report from The Athletic (via Express) which suggests the midfielder is stalling when it comes to signing a new deal.

It is no secret that the 26-year-old Portuguese international joined United with the ambition to lift silverware, something the Red Devils haven’t done since 2017.

Although major improvements have been made over the last 18-months, the club are still someway off, which is best reflected in their up and down league form.

Back to Fernandes – It has been claimed that United opened contract talks with their star-man over three-months ago, however, with no agreement reached just yet, the ball is believed to be in Fernandes’ court.

It goes without saying, fans will be hoping their main-man signs on the dotted line, sooner rather than later.