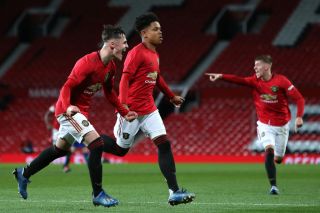 Both players are rumoured to have caught the eye with his recent performances for the club’s academy and could be the next name given a chance to impress at senior level.

According to a recent report from The Athletic, the club’s trainers have been so taken back by the youngster’s displays that they’re considering promoting them.

Worth noting – Given the fact Mejbri is currently out injured, The Athletic’s report does stress that it’s more likely Shoretire will be called up first.

Perhaps most impressively though, due to the ongoing COVID-19 pandemic, clubs have been forced to create secluded bubbles. Should the Red Devils’ decision makers opt to amend their first-team bubble, that will just show how much potential both players are deemed to have.

It goes without saying though, should Shoretire and Mejbri train alongside the likes of Bruno Fernandes, Paul Pogba and Edinson Cavani, their development will only expedite.

Both youngsters are two of the club’s most gifted youth talents and after both enjoying such fine youth spells, the future really is bright.