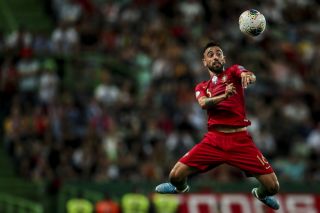 Manchester United are reportedly preparing to block Portugal’s approach to call-up midfield sensation Bruno Fernandes to the country’s national side.

Fernandes, 26, joined United a little over 12-months ago and after having a profound effect on the Red Devils, it hasn’t taken the midfielder long to be deemed irreplaceable.

According to a recent report from the Daily Mail (via MEN), clubs are weighing-up whether or not to prevent players joining up with their international team-mates for the next round of fixtures.

One player who could also be effected is United’s Fernandes whose country are currently preparing for three World Cup qualifiers.

There are concerns that should Fernandes compete for Portugal, the Red Devils will be without him for quite some time due to the UK Government’s current COVID-19 travel regulations.

The current quarantine regulations state that any travellers arriving from South America, Europe and Africa must remain isolated for 10-days, which of course, would include Fernandes.

Football’s world governing body have announced that clubs will be able to legally stop players competing internationally if it means they would miss domestic matches upon their return.

Portugal’s next three World Cup qualifiers are scheduled to kick-off on March 24 (vs Azerbaijan), March 27 (vs Serbia) and March 30 (vs Luxembourg).