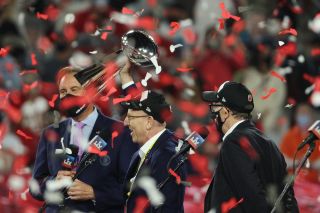 The Bucs, lead by legend quarter-back Tom Brady, claimed the 55th Super Bowl early on Monday morning (UK time) in what was a 31-9 thrashing over the Kansas City Chiefs.

Brady, 43, who will arguably go down as the sport’s greatest ever player, lifted the world-famous Vince Lombardi trophy and in turn claimed his seventh series ring.

After what was a brilliant night of sporting action which saw Brady and tight-end Rob Gronkowski combine for two touchdowns, setting a new Super Bowl record (5) in the process, as per Sky Sports.

After owning the American Football franchise since 1995, the Glazer family have now seen their side lift the illustrious Super Bowl on two different occasions, with their first victory coming back in 2003.

An ecstatic Joel Glazer watched on as his side ran out clear winners and even took the time to address fans after the celebrations.

Speaking after Monday morning’s Super Bowl LV, Glazer, as quoted by the Express, said: “I’ve got to say, I’ve got to start by saluting all the healthcare workers here. They’re the real champions!

“Now to our great fans: We did it at home. My father had an expression, if you want to know the road ahead, ask the person that’s been there.