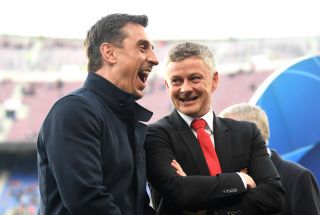 However, since his retirement at the end of the 2010-11 season, United have only managed to lift the Premier League on one other occasion (2012-13).

Despite sitting in second place in this season’s table and although the Red Devils are making huge improvements under current manager Ole Gunnar Solskjaer, there is still a feeling the side are someway off claiming domestic gold.

United were early outsiders to go on to lift this season’s Premier League, however, a patchy run of form has seen them win just five-points from a possible 12.

After watching bitter-rivals Manchester City go on a clinical 14 game unbeaten run in the Premier League, Pep Guardiola’s Citizens now sit top of the pile on 50-points, also with a game in-hand.

It goes without saying, with just 15 matches left to play this season, the Red Devils now face a mountain of a task if they’re to claw their way back into genuine title contention.

In light of the Red Devils’ disappointing collapse, speaking on his podcast (as quoted by Metro) Neville has been weighing-in on what next season may have in store for the Red Devils.

“It shows where United are right now. They’re just not quite there in terms of winning the title, I never thought they were.

“I never thought they were because the performances weren’t good enough and there was something missing. I didn’t expect them to win the league at the start of the season, they’re not there yet.

“It’s disappointing but it’s not surprising. I think they’re on the right track. I think it’s been clear over the last few weeks with the results, that form is not going to win you the title.

“For me, I don’t expect them to win the title this year. But what I do expect is for them to get closer to Liverpool and Man City and I expect them to challenge next year. I think there’s that sense in the club.”