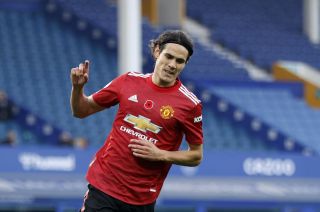 Manchester United striker Edinson Cavani has spoken about the importance of winning silverware.

The seasoned veteran was purchased with a view to add some much needed footballing know-how to a developing young side.

Despite only joining a little over six-months ago, Cavani has already racked up seven goals and two assists in all competitions.

The talented South American, alongside his team-mates, is currently preparing to host David Moyes’ West Ham United in the FA Cup’s Fifth Round.

The important cup tie is scheduled to take place on Tuesday evening with kick-off at Old Trafford set for 7.30pm (UK time).

Coming into the game, United will be seething following a recent shock 3-3 draw against Everton in the Premier League in a game which saw the Red Devils throw their lead away, twice.

Elsewhere, one of England’s most improved outfits West Ham, will also be fancying their chances against an up and down United side.

Despite the Red Devils coming into Tuesday’s match as red hot favourites, one player who is not taking the cup tie for granted, is Cavani.

The 33-year-old forward, who lifted Italy’s equivalent competition in 2011-12 whilst with Napoli and France’s equivalent four times with PSG has reaffirmed his desire to do the same with United.

Speaking to the United Review (as relayed on the club’s official website), Cavani said: “I haven’t had chance to read or study about this trophy [the FA Cup] with any great depth, but I believe that every cup or piece of silverware is always very important.

“I’ve always felt that way and that has always been my philosophy in life.

“For me, football is all about never-ending, continuous competition. Every game, whatever the stature of the trophy at stake, has a different impact amongst the fans and the public in general. But in my eyes, football is one hundred per cent about competing, in every kind of match.

“I’m thinking it must be a bit like the Cup in France, a competition that has many years of history behind it, and which features teams from the Second and Third Divisions, and teams knock each other out as they progress through the various rounds. And it’s a very prestigious trophy to lift because you can get drawn away from home against really tough opponents at awkward venues.

“I can easily imagine just how important a trophy it is. But over and above any of that, as I told you before, for me, football is all about competition, pure and simple, and you always have that desire to win, whatever cup you’re playing for, it’s always important. And as I always say, winning isn’t easy, and so when you win, you have to enjoy it, and you also have to try to get into the habit of winning.”