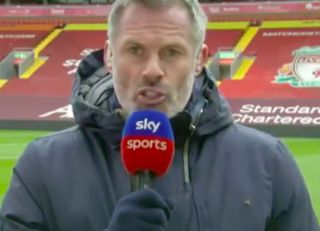 United were dealt a huge blow to their slim chances of lifting the title on Saturday as they conceded a 95th minute equaliser in the 3-3 draw against Everton.

The Reds are now five points Manchester City having played a game more after dropping points against Sheffield United, Arsenal and now Carlo Ancelotti’s side.

Carragher, speaking before City tightened their grip at the top of the league with a 4-1 victory over Liverpool,  suggested United have bottled their chance of domestic success.

United boss Ole Gunnar Solskjaer drew criticism for his comments after the Everton draw for downplaying any title hopes.

“We’re not talking about winning titles,” he told Sky Sports.

“We shouldn’t even be considered as title-chasers. That’s one for you [the media].”

And Carragher believes United have got overexcited and have simply been happy to be within touching distance of the leaders in this unique season.

Solskjaer’s side have made huge progress this season but failure to beat Sheffield United and close out victory against Everton has dented the possibility of a 21st league title.

Listen to Carragher’s thoughts on United below. Footage courtesy of Sky Sports.

🗣 "I don't think Manchester United fancy it, they're just happy being involved, they've almost bottled it."@carra23 isn't convinced Manchester United believe themselves that they are in the title race pic.twitter.com/RM8OjyDUl8