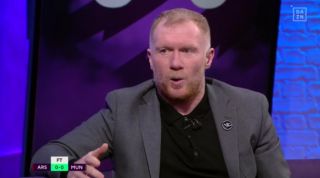 Paul Scholes has identified the precise moment the game got away from Manchester United in their 3-3 draw with Everton on Sunday.

The former United midfielder believes Paul Pogba getting injured was the key moment in the game, as it saw Ole Gunnar Solskjaer’s side lose control in the middle of the pitch.

I’d agree with this and bringing Fred on for Pogba at that point of the match changed the team’s dynamic in a way that wasn’t needed so early in the game.

This allowed Everton to stamp some authority over the game and they did enough to secure themselves a point on their travels to Old Trafford, after losing to United twice at Goodison Park this season.

Scholes believes the Red Devils were in control with Pogba on the pitch, but it fell apart after the World Cup-winner appeared to sustain a thigh injury.

“That’s a big blow. If you’re talking about title hopes, it’s a big blow for them. Of course it is,” Scholes told Premier League Productions, as cited by The Metro.

“I just feel Paul Pogba going off was a big moment in the game. I thought they had complete control up to that point.

“Fred coming on, they lost control in the middle of the pitch. [Andre] Gomes, Doucore and [Tom] Davies really started to take control of the game and that was a big blow for United.

“Conceding a goal that late, it’s not a good look. Are they totally out of it? It’s going to be difficult from now on I think.

Not long ago it would have been a big surprise to hear Scholes compliment and it’s nothing to do with the former United midfielder. The fact of the matter is, Paul Pogba has picked up performance levels and this is the player we want to watch in the side every week.