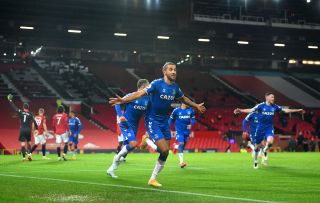 Another stat to make yesterday’s worst even worse.

It was just the second time in Premier League history that Manchester United have led 2-0 at home at half-time and not gone on to win the match, as per OptaJoe.

This is a quick reminder of just how much of a blow it was for United to let their lead slip away twice. You will get punished for poor defending at this level.

Goals from Edinson Cavani, Bruno Fernandes and Scott McTominay should have got the job done for Ole Gunnar Solskjaer, but dodgy goalkeeping and defending let them down on Saturday night.

And to prove that United still an inconsistent outlet, this 3-3 result came days after beating Southampton 9-0.

2 – This was just the second time in Premier League history Manchester United led a home game by 2+ goals at half-time and failed to win, following a 2-2 draw against West Brom in October 2010. Drama. #MUNEVE pic.twitter.com/9myHH5C6Sh

All eyes will be on Liverpool v Manchester City today, but the Scousers aren’t in form and City will be looking to pull away in a title race of their own.

United are one of the teams left to put pressure City but Liverpool could be out of the running if they lose today, not that I think they have a chance at keeping the title this season.