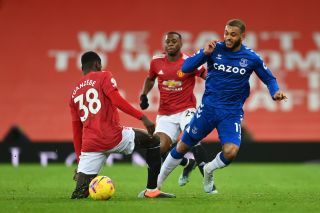 The Manchester United centre-back was targeted with racist comments on Instagram after Dominic Calvert-Lewin scored a late equaliser for Everton in a 3-3 draw at Old Trafford.

It was disappointing and felt like a loss, but I am a lot more disappointed by the reaction of some morons online than I am about the result.

This is the second time in recent weeks that Tuanzebe has been subjected to racist abuse online.

He posted a video on his Instagram after full-time, with the caption: “MY RACE My RELIGION My COLOUR=FOOTBALL”, in a response to the abuse.

We were disgusted with the comments aimed at the defender after United played Sheffield United. The club also released a joint statement with Everton, Liverpool and Man City condemning the abuse endured by a number of professional footballers.

Not only has Stretty News called on social media companies to do more about this sort of abuse online, Mayor of Greater Manchester Burnham has called on these tech giants to “step up” and hold themselves accountable if and when racist abuse is reported on their platforms (via Sky Sports).

Moreover, Chelsea defender Antonio Rudiger has revealed he has also been subjected to racist abuse on social media by fans who blamed him for the departure of Frank Lampard, as reported by the Daily Mail.

What horrible times we live in.