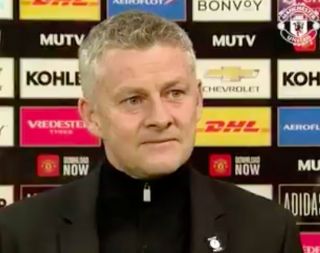 Ole Gunnar Solskjaer wants his Manchester United players to deliver a performance against Everton that reflects the club’s spirit on the 63rd anniversary of the Munich Air Disaster.

United face Carlo Ancelotti’s Everton on the same day that they commemorate the darkest day in their history and it will be a poignant occasion at Old Trafford.

Solskjaer has made one change to his side as Paul Pogba replaces Fred in the midfield pivot.

The United boss explained that Pogba had a ‘well earned rest’ in the 9-0 rout against Southampton and is raring to go this evening.

Meanwhile, Edinson Cavani retains his place leading the line despite some doubts over his fitness as he was forced off against the Saints at half-time due to a knock to his ankle.

Solskjaer believes Cavani’s pressing ability could be crucial as they aim to make it back-to-back home wins in the Premier League.

Listen to Solskjaer’s pre-match interview below, courtesy of MUTV.

"For us it's about putting a performance out there that respects the spirit of United."