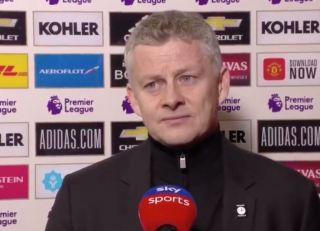 Ole Gunnar Solskjaer was not happy with the amount of stoppage-time added on Saturday night at Old Trafford, though he also questioned how his team played the game in the final moments.

It was a bad performance from a defensive point of view, but United attacked really well throughout the game and I think we seen our best front three start today.

Ultimately, this was a wobbler and Ole Gunnar Solskjaer is right to be unhappy with his players because their mistakes cost us in the end.

When we went 3-2 ahead it was always going to be unforgivable to concede again.

Solskjaer doesn’t pin the result solely on the amount of stoppage-time added because that would be daft. He merely mentions it as a frustrating factor that came with the game.

🗣"Why there was 4 minutes is beyond me, but all we have to do is get the ball into the corner"

Ole Gunnar Solskjaer was not happy with the way Manchester United conceded their goals against Everton but was happy with their overall performance pic.twitter.com/5WZxXNoj7M

Read more: Video: Lights go off as Gary Neville makes his final point of the night after United draw