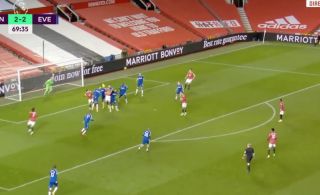 Everton clawed back from a 2-goal deficit just seven minutes into the second-half. It was a major blow to a United side who lost Paul Pogba to injury before the break.

But they kept plugging away and got the goal they deserved to put them ahead.

Ole Gunnar Solskjaer will be delighted with Scott McTominay scoring again as he’s become a really important player in the team — straight out of the academy!

He converts a carefully guided header from a stunning Luke Shaw cross.

The left-back who was slated for his play in the final third is certainly proving his critics wrong of late.

Come on, Reds. Let’s get those three points.