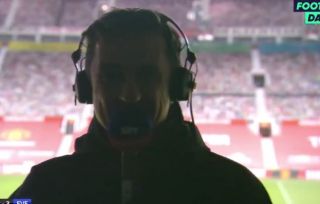 Come on… Gary Neville has had enough drama for one night.

Gary Neville was about to make his final point of the night on Sky Sports after Manchester United’s 3-3 draw with Everton, when the lights went out in the gantry.

United threw away two leads on the night from going 2-0 up and again at 3-2. Everton scored a stoppage-time equaliser as United drop points in what could still become a Premier League title race.

The former United full-back was about to make the point that United played well on the night but need to cancel out the avoidable mistakes.

The lights going out as @GNev2 makes his final point of the night! 🤣 pic.twitter.com/Ji8nCW38et

Neville jokes that Jamie Carragher was up to his old tricks!

Read more: Video: Gary Neville explains how Fernandes can become a God at United like Cantona