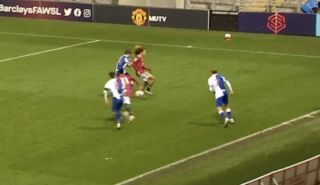 Manchester United’s under-23s were back in action on Friday during a Premier League 2 match which saw them beat top-of-the-table Blackburn Rovers’ under-23s 6-4.

New-signing Amad Diallo was also in action once again for the club’s youth side as he continued to impress with three assists and another goal.

During the match’s final stages, Diallo and midfielder Hannibal Mejbri were spotted forming a brilliant partnership down United’s right-side.

Both players were seen using their incredible technical abilities as they played their away around Blackburn’s defence.

Mejbri and Diallo both have undeniably bright futures and surely it won’t be too long now until we see either one awarded with their first-team debut.

Read more: Remembering Munich 63 years on: Where is the modern day Jimmy Murphy?