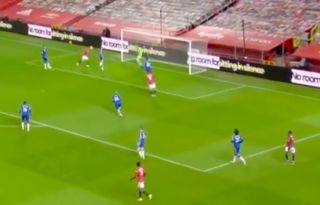 Edinson Cavani won’t be kept quiet for too long.

The Manchester United striker hasn’t seen much of the ball in the early exchanges against Everton at Old Trafford but provided a decisive impact midway through the first-half.

But the goal would not have been possible without a stunning delivery from Marcus Rashford.

Rashford is often criticised for his final ball but delivered a glorious cross that gave Cavani the perfect chance to score.

It’s the Uruguayan frontman’s third goal against the Toffees in as many games this season and United have a crucial advantage.

🗣 "Rashford with the cross… Cavani!"

Edinson Cavani opens the scoring for United with a back-post header!