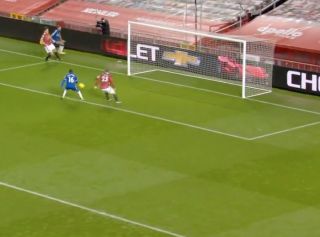 Everton are very much back in the game.

Abdoulaye Doucouré scored his second goal in the Premier League for Everton with a tap-in after David de Gea failed to get a shot away seconds earlier.

De Gea has got to do better in these situations and it’s not good enough from a player of his standard.

It’s a warning of what could happen if United lose attention at any point in the second half.

Three minutes later United completely threw away their lead as James Rodriquez made it 2-2 with a terrific strike.

Now Carlo Ancelotti’s side will feel they have something to play for in the second half.

With Paul Pogba gone off injured and replaced by Fred, it might be time to bring on Donny Van de Beek.

"David de Gea has to do a lot better than he does."

Abdoulaye Doucoure is there to convert the rebound as Everton score on the break!

What a turnaround from Everton! And what a strike from James Rodriguez 💥

One response to “Video: De Gea blunder allows Everton to pull one back before James equaliser 3 mins later”