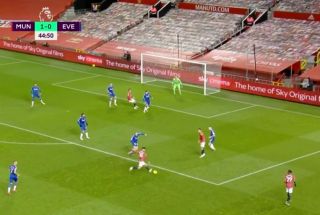 The Portuguese playmaker dummied Fred’s pass on the edge of Everton’s box and space opened up for a shot when he was found by Aaron Wan-Bissaka.

Fernandes doesn’t need a second invitation to oblige and hit a stunning curling effort that beat Robin Olsen and dipped into the top corner.

It was a goal that resembled the nonchalance and ingenuity of Eric Cantona, a man it is no longer irreverent to compare Fernandes to.

Edinson Cavani had given United the lead midway through the first-half after Marcus Rashford’s stunning cross.

And this was another special moment from a totemic player just before the break.

See the goal below. Footage courtesy of Sky Sports.

The whip and the dip 💥

Something special from Bruno Fernandes 🙌