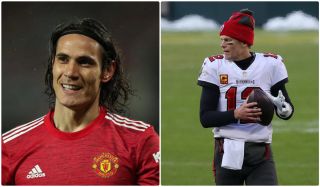 The Glazers will be praying for a big pay day should their teams on both sides of the Atlantic experience glory this season.

On Sunday the Tampa Bay Buccaneers compete in the first-ever home Super Bowl, and Manchester United are currently three behinds behind Premier League leaders Man City having played a game more than our rivals.

Ole Gunnar Solskjaer has stressed that United have their own Tom Brady in the form of Edinson Cavani.

For those of you unaware of Brady, the Buccaneers will be counting on the 43-year-old quarterback in other their claim their second championship since Malcolm Glazer’s takeover in 1995. The former New England Patriots quarterback is going for his 7th Super Bowl this weekend!

To keep the PR machine rolling, even though it will irk certain fans, Solskjaer said he was “very pleased” to see the Buccaneers reach Sunday’s finale.

“I think when you operate at the top you try to widen your horizon and have a network you speak to and I’m very pleased for the Glazers and the owners that they play the Super Bowl this weekend,” Solskjaer said, as per The Independent.

“For me, the big learning from that is the Tom Brady story, what he does to keep going at such an age and to be so professional, he’s come into the club and brought them to the Super Bowl.

“It’s not him by himself of course but, we tell our young players to be at the top level it’s not just natural talent it’s dedication, hard work, focus.

“We’ve got the example of Edinson coming into our place and how much one player can influence a team. We’ve had Eric Cantona coming into the team with that experience.

“So Tom Brady is an example for every sportsman out there that it’s still possible at the age of 42 or 43, whatever he is now. But yeah, we do keep the dialoghue between ourselves.”

The Athletic has done a Q&A piece with Manchester United correspondent Laurie Whitwell and Tampa Bay Buccaneers reporter Greg Auman which is worth a read.