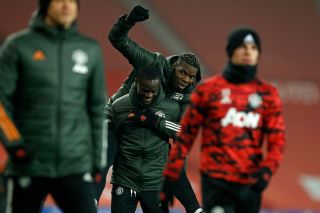 Ole Gunnar Solskjaer has hinted that Paul Pogba could still sign a new contract at Manchester United after revealing the club are keeping an ‘open dialogue’ with the French midfielder.

The 27-year-old is playing some of his best football for United at the moment – well, without doubt the best he’s been since returning to United five years ago – and was most recently voted the club’s player of the month for January.

Speculation over his future has been non-stop for years, and with his contract set to expire in the summer of 2022 (since United triggered the one-year extension clause in his deal) there has been constant talk about a return to Juventus.

The problem I see there being is Juve won’t pay the money United want for Pogba. And what will come after that, I’m not sure.

Pogba’s outspoken brother Mathias has since said United need to sell the World Cup-winner if they want to recoup a fee, but Solskjaer doesn’t seem bothered by those comments.

“Speculation about Paul is always going to be there,” Solskjaer said, as per talkSPORT.

“We’ve got a good open dialogue with Paul, so what we talk about and how we see that situation remains between us of course.

“I’m just happy he’s focused, he’s playing really well and he’s happy in himself and that’s important. You can see Paul now enjoying playing football with a red shirt on.”

There has been times this season and in previous campaigns that Pogba’s performances have been insultingly poor. And, we probably shouldn’t forget that last season it really didn’t sound like he wanted to be at the club…

Or has agent Mino Raiola created that atmosphere around his client? When Solskjaer speaks about the situation it sounds less dramatic.

“I think you should ask Paul what he’s done because the answer is Paul has really knuckled down,” he added.

“He’s worked hard, he’s got his fitness. I have said this many a time, he had a bad season last season with injuries, he had COVID-19 this season, he had an injury but he really works hard and he’s playing in a team that plays well.

“He’s a big inspiration for everyone. He always has a big smile… well, not always a big smile because in training yesterday when the team lost you can see how that affects him and he wasn’t happy.

“But today it was a new day and he’s ready to go again tomorrow.”