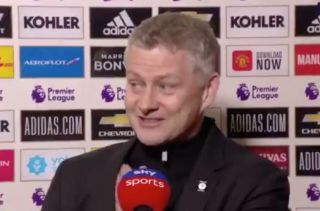 Ole Gunnar Solskjaer wanted a make his point clear tonight. Manchester United are getting better as a team but are not to be considered title contenders.

The Manchester United manager says the team is not talking about winning the title this season. And as the man in charge of the team, he must keep the players hungry and realistic about their chances.

After a disappointing 3-3 draw with Everton it’s important the team gets back on the training ground and stop conceding easy goals.

That’s pretty much what Solskjaer told Sky Sports after the match, as seen below:

🗣"We are not talking about winning titles, we should not even be considered as title chasers, that is one for you"

Ole Gunnar Solskjaer did not want to get drawn into title talk after Manchester United's 3-3 draw with Everton pic.twitter.com/6XhwMTRhkr

Let us know in the comments section where you think United will end up this season?

I’m going to stand by my prediction from the beginning of the campaign. 2nd…

Read more: Video: Lights go off as Gary Neville makes his final point of the night after United draw