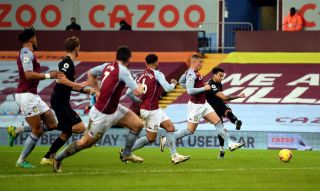 Jesse Lingard scored twice on his Premier League debut for West Ham and has been backed to get back playing for England.

Ole Gunnar Solskjaer believes Manchester United loanee Jesse Lingard will push on and earn back his place in the England squad after scoring a brace in his first match for West Ham, against Aston Villa.

Lingard had not played a single minute of Premier League football this season, but last week his move to the Hammers gave him a new lease of life and we want to see him succeed.

The 28-year-old fell down the pecking order at United because the team improved. He is not on the same level as Bruno Fernandes or even Donny Van de Beek. The fact we are in the process of moving on should be seen as a positive, although it’s bound to be difficult for Lingard being away from United – the only club he knows.

“I’m so happy for Jesse,” Solskjaer told reporters (via GOAL). “When we let him out, we felt we had to do the right thing by Jesse because he has been so professional, so good around the place, working really hard.

“He is always a bright character around the place. The times when I have not even had him in the squad, it has been difficult.

“But the conversations I have had with him have always been: ‘Be ready for when you get the chance. If it’s not here, you will definitely find it somewhere else.”

Solskjaer has been honest with Lingard and I think everyone at the club wants to see the player kick on and build a career for himself. He has sat idle for far too long and he’s already back in the conversation with England.

“He has kept going and you can see his fitness,” Solskjaer added. “He is as fit as a fiddle. I am delighted for him. Hoperfully he can push on and maybe give Gareth a challenge when he has to pick the squad for the Euros.”