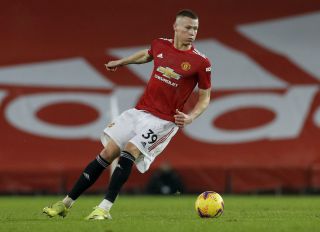 It’s been 332 days since Manchester United fans have been able to attend a match at Old Trafford due to the Covid-19 pandemic wreaking havoc across the globe. The Manchester Derby on the 8th March 2020 saw the resurgent Red Devils take on Pep Guardiola’s City side as United chase Champions League qualification.

Ole Gunnar Solskjaer’s side took the lead in the 30th minute when Bruno Fernandes quickly took a free-kick and found an unmarked Anthony Martial who finished past City keeper’ Ederson. City were desperately chasing an equaliser with the clock ticking down in injury time, when City keeper Ederson decided to throw the ball out. However, the careless throw was intercepted by Scott McTominay, who fired a shot from 35 yards out. The ball flew into the open net from distance to effectively end Pep Guardiola’s hopes of getting something out of the derby. As soon as McTominay’s shot found its way into the net, Old Trafford erupted into chaos as the academy graduate celebrated on his knees in front of the Stretford End. It was another exceptional display from the impressive Scott McTominay in the engine room for the Red Devils as he continues to be pivotal for Ole Gunnar Solskjaer’s United.

Scott McTominay was born in Lancaster, England in December 1996 to Scottish parents. His father Frank hails from Helensburgh, Scotland. Despite being born in England McTominay considers himself Scottish due to his strong Scottish family ties. The youngster has been associated with the Manchester United academy since he was 5-years0old attending the club’s development centre in Preston. He enjoyed a prolific career as a centre forward in the earlier years of his youth career at the club. Manchester United academy coach Warren Joyce saw potential in the young academy prospect and decided he should be converted into a central midfielder from centre forward due to his attributes. McTominay’s career came to a crossroads as he struggled with his relatively small frame due to lack of growth and development issues which inflicted internal injuries on him. At the beginning of 2015, an 18-year-old McTominay was only 5ft 6ins resulting in United’s youth team coaches having their doubts whether he would be able to make the grade at the top level due to his physicality. He was rarely singled out as a future star and needed the support of academy staff such as Brian McClair, Nicky Butt and Paul McGuinness to ensure McTominay was even kept within the club’s youth ranks. Thankfully the youth team coaches kept faith in the young 18 year old and remarkably by the end of 2015 McTominay went through a growth spurt growing an incredible 10 inches in 12 months. He transformed himself into a 6ft 4ins commanding central midfielder in the space of a year.

After this, McTominay continued his development with the under-23’s under the guidance of interim manager Nicky Butt. The midfielder was impressive in central midfield in the professional development league scoring three goals in 21 appearances. His assured performances and imposing physical presence in midfield caught the eye of United boss Jose Mourinho. The “Special One” called up the English born Scotsman to train with the first team in March 2017. Mourinho was impressed with McTominay’s work rate, willingness to follow instructions and overall character. He was rewarded for his impressive performances in training by being called up to the first team squad making the substitutes bench against Swansea City in the Premier League. He made his first Premier League appearance for the Red Devils on the 7th May coming on as a substitute in the 2-0 defeat to Arsenal at the Emirates Stadium. McTominay started United’s final Premier League game of the season a 2-0 win at Old Trafford against Crystal Palace.

McTominay enjoyed a frantic end of the season being promoted to United’s squad for the final five fixtures of the Premier League season, with Jose Mourinho resting key players for the Europa League. United manager Jose Mourinho is a big fan of the Scotsman and was impressed with his performances during the pre-season tour in America. The midfielder scored his first senior goal for the Red Devils against Norwegian side Valerenga in the last pre-season friendly before the start of the season. McTominay’s stand out performances during the pre-season tour endeared him to Mourinho, and over the course of the 2017/18 season he began to earn more opportunities with the first team. McTominay enjoyed his breakthrough season for United making 23 appearances in all competitions quickly becoming one of Mourinho’s most trusted players. The Portuguese manager trusted McTominay in big games because of the Scotland international’s positioning, ability to win tackles and carry the ball forward into dangerous positions. He also provided extra protection to the back four in comparison to United’s other midfielders which Mourinho liked. The “Special One” showed his faith in McTominay when he dropped star midfielder Paul Pogba for the crunch Champions League tie against Sevilla at Old Trafford. His inclusion in the starting team was met with some disrespect as fans and pundits questioned whether he was really good enough to be the answer to United’s midfield problems. McTominay was labelled a “teacher’s pet” under Mourinho by some portions of the media and in some fan circles which was only intensified when the Portuguese manager rewarded him with his own award at the club’s end of the season awards ceremony. Mourinho took the opportunity to announce McTominay as his own Player of the Year award after an excellent season for the promising 21 year old.

The “Special One” set the tone for his third season at the club creating a negative and toxic atmosphere at the club. Mourinho was unhappy with executive-vice chairman Ed Woodward and the board’s lack of investment in the transfer market and publicly criticised them. He also publicly criticised a number of first team players during the pre-season tour which added to the already negative environment at the club. McTominay struggled to find consistency and form during the first part of the 2018/19 season as the Red Devils struggled under the management of the increasingly unpredictable Mourinho. The final straw came after the disappointing defeat to Liverpool at Anfield. Mourinho was sacked by the club the following day on the 18th of December 2018. United were struggling in the Premier League trailing league leaders City by 19 points. Despite a poor first half of the season McTominay signed a contract extension at the club until 2023 with the option of another year.

New interim manager Ole Gunnar Solskjaer opted to play the experienced Nemanja Matic in the first few weeks of his tenure as United enjoyed a 14 match unbeaten run in all competitions. The Scotsman got his first opportunity under Ole Gunnar Solskjaer when Nemanja Matic suffered a hamstring injury. McTominay started against Liverpool and impressed in the draw at Old Trafford. The 22-year-old took his chance and put in an impressive display and repaid Solskjaer’s faith in his selection. McTominay’s excellent performance coincided with Solskjaer comparing him to former United legend Darren Fletcher, who made almost 350 appearances for the club. The United manager praised his performance stating (via GOAL): “I learnt a lot about Scott McTominay, who I’ve been waiting to give a chance in a more attacking role, he can run into the box, is dangerous, he was very similar to Darren Fletcher today for us”. The Scotsman produced exceptional displays in the Champions League matches against Paris Saint-Germain and Barcelona earning plaudits from pundits, fans and reporters. McTominay’s excellent form continued under Solskjaer and he scored his first competitive goal for the club in the 2-1 defeat to Wolves in the Premier League. He made 22 appearances scoring 2 goals for the Red Devils in the 2018/19 and became a fundamental member of the squad under new manager Ole Gunnar Solskjaer.

Since Solskjaer’s permanent appointment as manager on the 28th of March 2019, McTominay’s influence in the first team squad has gone from strength to strength. He has formed an industrious relationship in central midfield with Brazilian international Fred with the duo deployed as a double pivot for the Red Devils. McTominay’s high energy, technical ability and positional awareness have made him a mainstay in the United starting team for the past two years. The midfield duo branded “McFred” by United fans are Solskjaer’s preferred choice in the engine room as they give the Red Devils protection in midfield and the capability to create opportunities to break on the counter attack. He might not have the flair of Bruno Fernandes or Paul Pogba but Scott McTominay will give everything for the club that he loves. He epitomises everything that the club’s ethos and values stand for, and his performances reflect how much it means to him to play for Manchester United. The 24-year-old midfielder is definitely showcasing captain characteristics and should be seen as potential club captain in the future. Scott McTominay is everything Manchester United football club is about and he is no longer the “teacher’s pet” but one of the most important players at the club.