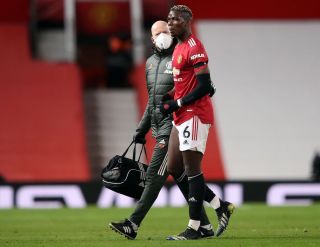 Ole Gunnar Solskjaer didn’t look happy on the bench when it became clear Paul Pogba had hurt himself.

The Frenchman needed to be replaced after an off-the-ball incident where it looked like he strained his right thigh.

Pogba initially attempted to walk off the pitch by himself but then called for treatment on the pitch.

Fred came on to replace Pogba in midfield, and will now slot in alongside Scott McTominay.

Manchester United currently lead the game 1-0 thanks to a goal from Edinson Cavani, but without Pogba on the pitch we lack the creative spark we had at the start of the game, so urging caution wouldn’t be a bad idea at this point.

The Reds managed to double their lead before half-time and Solskjaer will be encouraged by what he seen in the first 45 minutes.

United have been the better team and Pogba had been doing a good job spraying the ball to either flank from the middle.

Fred has only ever scored one Premier League goal and he had an opportunity go to waste before the break.