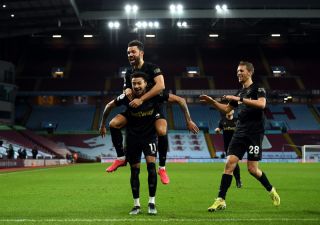 West Ham were right to jump at the opportunity to sign Jesse Lingard on loan in January.

A number of reports suggest Lingard had other offers, but it was David Moyes who reached out to a former player and made the deal possible. Lingard was obviously keen to work with Moyes again after their brief spell together at Old Trafford.

Given how he performed in his West Ham debut this week, scoring a brace against Aston Villa, other managers will be sorry they didn’t try and make a deal happen in their favour.

Not only is Lingard trying to get back into the England squad, he’s opening a new chapter in his career and we wish him all the best. We’ll be happy if he comes back a better player or gets the move that will bring the best out of him.

His two goals will do his confidence the world of good and it could help West Ham finish their already impressive campaign strongly.

Paul Merson believes that everyone else will be kicking themselves now that Lingard could rediscover his form.

“He was a great signing for West Ham,” he wrote in his Daily Star column. “He brings them guile and pace – and he scored twice on his debut.

“To be honest I expect the keeper to save both of those shots, but I’m pleased for him. He’s been through a lot.

“He’s not played for a long time. But I can remember when he was in the first team every week and playing for England.

“There will be a few teams kicking themselves they didn’t get him. But he suits West Ham. They should try and sign him in the summer.”