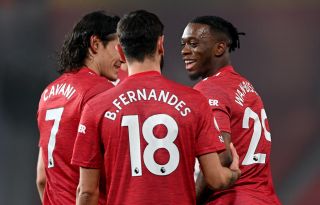 The only real noticeable absentee along with Eric Bailly, who we already knew was injured, seems to be Juan Mata for tonight’s game against Everton.

Edinson Cavani makes the squad despite being withdrawn at half-time during Manchester United’s 9-0 win over Southampton during the week. The Uruguayan sustained a knock following a heavy challenge from Kanye Ramsey and was replaced at the break by Anthony Martial.

I think it’s time also for Cavani to nail a spot in the team for league matches. He’s the best out-and-out striker at the club, a lethal finisher, and we’ve got to win football matches in order to compete. It’s all well and good Solskjaer comparing him to Tampa Bay Buccaneers quarterback Tom Brady, but he needs to be playing every week.

Martial scored twice off the bench and will be hoping to start tonight against Everton. It may be key to getting him back to his best, but we can’t have another poor display from our forwards. They should be buzzing after equalling United’s record 9-0 win from 1995 and keen to get a spree of scoring goals underway.

It must be disappointing for Bailly, who had a brief run in the team performing at a very high standard to be thrown another setback by missing more football. He’s not played since the 2-1 win over Fulham on January 20.

While we’re not overly surprised by Mata missing out this may be a sign that he, like others have in the past, has fallen down the pecking order. He was never a regular this season and I’m sure he can expect to face Real Sociedad in the Europa League.

The Spaniard surely knew at the start of the season that with Donny van de Beek coming in his game time would be limited.