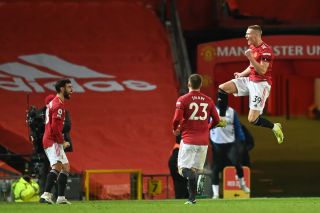 Poor goalkeeping gave Everton a lifeline as he palmed straight to Doucore. Olsen’s subsequent error would have made the Spaniard feel a whole lot better about his own miscalculation., but he was far too weak for Everton’s late equaliser. 4

Caught out on more than one occasion as United tried to play the offside trap. Improved offensively but not his finest defensive showing. 5

Shaky moments as Everton scored twice in just over three minutes. He dealt well with Calvert-Lewin for large periods but couldn’t command the situation in vital moments. 5

His partnership with Maguire doesn’t breed confidence despite the fact he nullified the threat of Richarlison for large spells. 5

Third assist in the week gave United their third. He is vital to Solskjaer’s side in attacking transition and his consistency is impressive. 7

Sharp in all areas and his passing was progressive. Jumped well to head in sixth goal of season though Olsen’s efforts left a lot to be desired. 7

His disconsolate walk down the tunnel was concerning and United lost their midfield dominance in periods without him after the break. 5

It’s no longer irreverent to compare his impact to that of Eric Cantona and his goal resembled the nonchalant work of ‘The King’. Linked well with each of United’s front three. 7

Maligned by some for final delivery but that wasn’t a problem when Cavani obliged for the opener. He should have restored United’s advantage but wasn’t clinical with a left-footed dink. 6

Excelled on the right flank and he is starting to make that position his own. Goals are not coming as regularly as they did last season but his overall improvement in play should not go unnoticed. 8

Third goal this season against Everton was preceded by great movement. He is United’s focal point and his work-rate on and off the ball has to be admired. 7

Poor upon his arrival as United lost control and surrendered their lead early after the break. Improved as United gained more control after McTominay’s header. 5