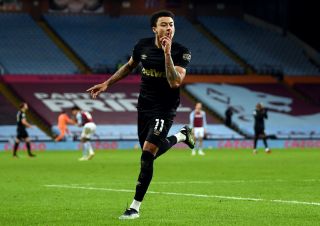 After been at his boyhood club since the age of seven Jesse Lingard finally departed Manchester United last week joining West Ham United on an initial loan deal until the end of the season bringing to an end a 21 year stay at the club.

News of Lingard’s departure from Old Trafford didn’t really come as a shock to the Manchester United faithful. Having barely featured for the Reds under head coach Ole Gunnar Solskjaer, a move away from United appeared inevitable and although the move may be only a loan deal on paper, hand on heart I feel Lingard will never return back to Manchester United.

Despite never truly fulfilling his potential Lingard still enjoyed a largely successful stay at Old Trafford winning the FA Cup, League Cup and Europa League and although he may not missed out the bigger prizes that is still an impressive medal collection.

Having had numerous loan spells away from the club at the likes of Leicester City Birmingham City, Brighton and Derby County it wouldn’t be till the 2015/16 season where Lingard would get his breakthrough into he Manchester United first team and right from the off he looked at home going on to become a regular in the Reds first team. His terrific work rate off the ball combined with ability to not only score goals but provide them as well made him a real special asset and one which proved invaluable in United success.

However I felt the expectations on Lingard where set far too high and that ultimately proved to be his downfall at the club. He was expected to come in and be one of United’s main men when in reality he was a very useful squad player. Lingard was never going to be one of those players who would score us twenty plus goals a season or win the Ballon D’or. He was a player who we could rely on to give us 110% on the pitch and one who we could rely on to do the business whenever called upon. He wasn’t the world beater we had all hoped for.

Lingard also came through the ranks at a time when Manchester United were going through a transitional period and it must be remembered that had Lingard came into the side when Sir Alex Ferguson was still manager at a time when the Reds were the best team in the land things could have worked out differently.

Fast forward to the present day and Lingard has enjoyed a successful start to life in a West Ham shirt scoring two goals on his debut against Aston Villa midweek. Having not featured on the pitch for some time its great to see Lingard back enjoying his football but it is a far cry from what we thought he could have achieved and now at 28-years of age Lingard will likely never ever fulfil his true footballing potential.