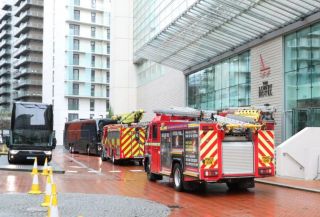 Manchester United’s preparations for Saturday night’s Premier League clash against Everton could have been disrupted, according to reports.

Fire engines were called to a scene at the Lowry Hotel where the team usually meet before games that are held at Old Trafford.

The Mirror report claims United team coaches turned up just before 1pm with all playing staff getting off and entering the team hotel. Just a minute later two fire engines turned up outside the hotel.

However, it was no more than a false alarm. Unconfirmed reports indict a kitchen malfunction could have triggered the false alarm.

A win from the Reds tonight should put pressure on both Man City and Liverpool, who face-off tomorrow in the Premier League, and if we want to seriously compete this season beating Everton would at least signal intent.

I’ve seen enough performances this season to confidently say United have improved and our league position is proof of that. Now it’s time to make a real statement.

At least there was nothing to worry about at the Lowry Hotel.

Picture via The Mirror