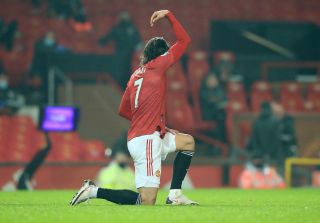 Manchester United look to continue their goalscoring spree after beating Southampton 9-0 during the week. Ole Gunnar Solskjaer has just announced his starting line-up to face Everton at Old Trafford tonight.

It’s an important game that we should be winning at home, especially after winning at their place twice this season, and it would pile pressure on both Liverpool and Man City ahead of their match tomorrow.

It could be a big weekend for the Premier League season. Does wins for United and City completely write off Liverpool’s chances of defending the title? I would think so, but it’s also too early to be getting ahead of ourselves — as we’ve seen both Tottenham and Chelsea drop from the top this term.

📋 Here's how we'll line up to take on the Toffees.

Fred is on the bench with Scott McTominay given a host of responsibilities in the middle.

Kick-off is in just under an hour.