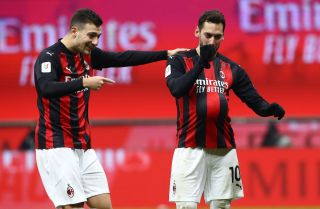 AC Milan are reportedly set to open formal talks with Manchester United in the coming days over Diogo Dalot.

The Portuguese full-back has impressed during his time in Serie A on-loan and now it seems like the club’s hierarchy are keen to make his season-long loan deal permanent.

My thinking is that Ole Gunnar Solskjaer already has plans to sign a new right-back in the summer, to compete with Aaron Wan-Bissaka like Alex Telles did at left-back with Luke Shaw, and they could recoup the money they spent on Dalot in 2018.

Dalot, 21, joined United in a £19.8m transfer from the Portuguese giants, as per Transfermarkt.

According to Il Milanista, AC Milan are set to open talks for the young defender with a deal worth £15m being touted.

During his time in England, Dalot struggled to nail down a spot in the United team, and after seeing him play for United I’m not convinced he’s good enough for the Premier League.

I would take delight in being wrong, of course.

Time will tell if the Red Devils are willing to sell Dalot.