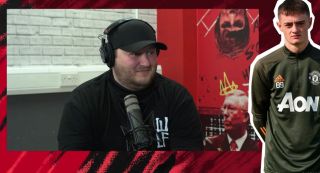 Jay from the Stretford Paddock is joined by Manchester United academy expert David Pritt to discuss the latest results in the U18’s and U23’s as well as the loan movements for some of United’s highest-rated youngsters.

The first Academy review of the year has aired on Stretford Paddock and Joe Hugill gets plenty of praise after scoring four goals against Liverpool’s U23s last weekend.

That game also marked the debut of Amad Diallo who scored a brace in the 6-3 win.

Pritt has all the information you need to know about the youth teams, so the video below is a good way catch up on the latest in just under 40 minutes.

He also runs us through Hugill’s four goals against the Scousers — and despite completing a hat-trick and more, he didn’t get his match-day ball.

Something needs to be done about that!

Without wanting to draw too many comparisons, Pritt says Hugill is Jamie Vardy-esque and similar to Ruud van Nistelrooy because he is always in and around the box.

Charlie McNeill will be pushing him in the team too. A lot to be excited about for United fans.