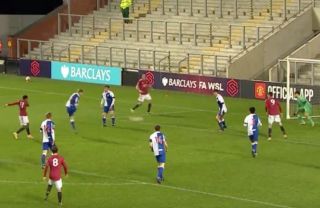 We’ve got a star on our hands.

Amad Diallo marked his debut with two goals against Liverpool U23s last weekend, and tonight he added a goal and three assist to his account for Neil Wood’s young side.

The defence is missing several key members due to loan moves and tonight they were without Teden Mengi who has joined Derby County to play under Wayne Rooney for the remainder of the season.

Diallo may take all of the headlines but of his recent transfer from Atalanta, but Shola Shoretire played a huge hand in United’s 6-4 win over Blackburn Rovers tonight.

Diallo strikes the ball on a half volley into the back of the net.

He’s having a big impact in the U23s side already and there will be fans watching tonight thinking it won’t be long before he makes his first-team debut.

No pressure but it looks like he’d have no problem dealing with any.