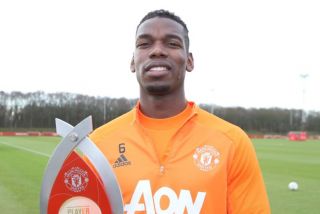 Earlier this week we brought you the news that Paul Pogba had been voted Manchester United Player of the Month for January – his fourth time winning the monthly award since re-joining the club in 2016.

Although the Frenchman’s future remains unclear his form has picked up a lot since the turn of the year. And now United are in a position where they could fight for the Premier League table, if Pogba can play like he did in January for the remainder of the campaign…

Of course, it doesn’t all come down to one player. It will take a lot more than Pogba playing at his best for United to beat Man City in the title race.

He deserves the award but Luke Shaw may feel he is unlucky to lose out.

Check out Pogba with his award below (via @ManUtd) – photo from Carrington:

Break down of the voting via ManUtd.com.