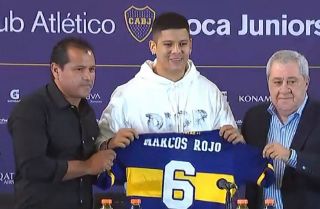 The Argentine defender was in the final six months of his United contract and it became clear that he was not part of Ole Gunnar Solskjaer’s plans. Harry Maguire, Victor Lindelof, Eric Bailly and Axel Tuanzebe were all ahead of Rojo in the pecking order at Old Trafford.

Rojo signed for United after impressing at the World Cup in 2014 when Argentina reached the final, only to lose to Germany.

Looking back at his 6-and-a-half-year stay, the 30-year-old won the FA Cup, Europa League and Carabao Cup. I’m sure from listening to Jose Mourinho bang on about the Community Shield he probably counts that too.

He has written a note expressing his gratitude towards the club via Instagram and states how he was honoured to be a part of a football institution like Manchester United. He also thanked the fans who always supported him in a United shirt.

Rojo shared a picture of himself in a United shirt, a video of his highlights at the club, and a graphic to show the four trophies he won as a Red.

On Instagram he said: “I want to take this opportunity to thank everybody at Manchester United who have helped me in the last 6 years. Since arriving in 2014 I have always felt privileged to be part of this incredible club with so much history. Thank you to all the fans who have always supported me when wearing the Manchester United jersey. Now begins a new chapter for me in my career but I will always have Manchester United in my heart.”

We would like to wish Rojo all the best at Boca Juniors!