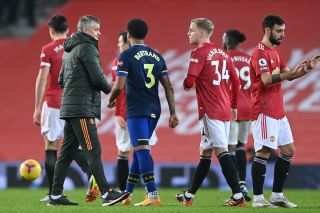 Manchester United will be looking to move level on points with Manchester City at the top of the Premier League table when they take on Everton at Old Trafford on Saturday night.

The Reds go into the game on the back of an emphatic 9-0 victory over Southampton at Old Trafford whilst the Toffees ran out 2-1 winners over Leeds United at Elland Road.

Eric Bailly remains a doubt to face Everton having picked up an injury during United’s victory over Southampton during the week whilst Paul Pogba is widely expected to return to the starting eleven having been given a rest midweek.

Victory over Southampton couldn’t really have come at a better time for Manchester United. Having dropped points against Sheffield United and Arsenal, the Reds found themselves sitting in second place now trailing Manchester City by three points but the win over the Saints could prove to be a timely one and in facing Everton it provides United another opportunity to get back on track.

Everton have enjoyed a good season thus far under head coach Carlo Ancelotti and although Saturday’s match wont be easy this is still I game, I expect United to win. Having already beaten Everton twice so far this season Solskjaer is no stranger to beating the Toffees and should United put in a repeat of the type of performance we have already seen at Goodison Park earlier in the season then United should be taking all three points.

With Manchester City not facing Liverpool till the Sunday the game against Everton provides United a real opportunity to pile the pressure on their noisy neighbours. Victory for the Reds would take the club level on points with City at the top and psychologically it could make a real difference in the knowing that they slip up United will be right behind them breathing right down their necks.

The title race looks set to go down to the wire this season and having already dropped points in the past few weeks its pivotal United beat Everton to really pile the pressure onto City.

It wont be a walk in the park nor will United have it all their own way, but I still expect United to beat Everton albeit it will be close.