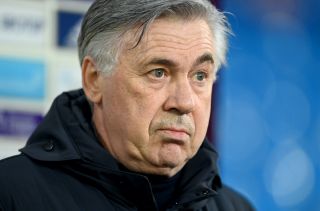 Carlo Ancelotti has also revealed that Everton goalkeeper Jordan Pickford remains injured, having sat our Wednesday’s win over Leeds United, and Robin Olsen is set to start on their trip to Old Trafford.

Pickford missed Wednesday’s 2-1 win at Leeds due to a rib injury suffered recently against Newcastle United.

“We have Pickford out for this game; he has not recovered yet,” Ancelotti told reporters, as per Liverpool Echo.

“We have Allan out; he has started training with the team today.

“We have Gbamin out; [he is] following his individual programme. It’s too early to say when he will be back.”

Ancelotti didn’t sound put off by the fact he has to call upon Olsen again, almost as if he expected it to be the way.

“He [Olsen] had a great game [against Leeds]. He played really well and he’s going to play tomorrow because Pickford is out.

“When Pickford will be back, he is going to play like he played usually, but I think Olsen can also play some games.”

United have already won twice at Goodison Park this season, so we need to be looking at this game as a way to keep momentum going. After beating Southampton 9-0 and seeing Liverpool lose to Brighton, it would be a shame now to beat the Toffees this weekend.

Ancelotti praised Solskjaer ahead of the match – but he also notes that we drew with Sheffield United not too long ago, and he will encourage them to have a go tomorrow.

“We played two games against them this season; we lost both at home. We have to change something for sure, because if we follow the same way we played, I think we are going to lose. We will try to plan a different strategy, and we’ll see how it works.

“This [9-0 win] is bad news! They scored nine goals, but at the same time, the [home] game before, they lost against Sheffield United. I have to choose what to say to the players, but the players know it will be a really difficulty game.

“United is a fantastic team; a team with a good mix between experience and talented young players. But I hope it will also be difficult for them to play against us.

“The mental aspect is really important. We have to try do something different, to create more problems than in the past games we played against them.”