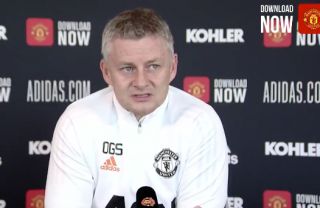 Manchester United won 9-0 this week but Ole Gunnar Solskjaer, nor any of his coaching staff want the lads thinking they can get complacent anytime soon.

There’s a lot of football to play and as things stand, Man City are on top of the Premier League. We should be aiming to keep the pressure on them and jump at any slips. It wasn’t long ago that we were at the top of the pyramid.

Manchester United showed during the week that they can also put the sword to teams, like City have been praised deservedly for in recent weeks — but talk of United’s 9-0 win over Southampton has been dominated by bad officiating and VAR.

The reaction from the press and social media is bound to be different to inside the dressing room. And like many of you, that’s what I really care about.

From the response, seen below in the video, you can tell that Solskjaer accepts Southampton were down to 10-men from the beginning of the match.

I think the group will be looking forward to getting back on the pitch to back up that unbelievable performance with a win over Everton.

OSG 💬 "You've gotta take the good with the good and the bad with the bad sometimes." pic.twitter.com/MGuSC16vXr

One response to “Video: Solskjaer’s calculated response to question about how United reacted to 9-0 win v Southampton”