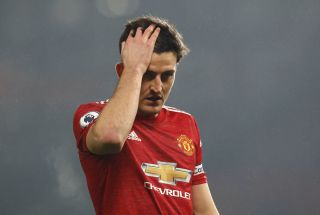 Harry Maguire has revealed how he was fined by Manchester United’s very own disciplinarian – Nemanja Matic.

The Manchester United captain is joined by the Serbian midfielder on the players’ fines committee.

Matic, 32, wasn’t happy when he felt Maguire was guilty of using his phone in a no phone zone at the Carrington training complex.

It led to a pay out which Maguire still disputes.

Speaking to the official Utd Podcast, Maguire said: “I’ve been fined once which is still debatable. It’s crazy but I let Nemanja do it. I took the hit and put the money in the pot.

“When you meet in the gym before training for pre-activation you are not allowed on your phone. We did pre-activation, I didn’t have my phone.

“But then you go outside to put your boots on and your aren’t allowed to go on your phone in that period. I had my phone and carried it out with me.

“I wasn’t on my phone because straight after training I was going to put my trainers back on and go up for a massage instead of coming all the way back.

“I could have gone straight to the massage and Nemanja fined me for that. He’s strict with everyone so I’m happy. I can set the standard.”

I think this helps highlight the good natured banter amongst the squad, something Ole Gunnar Solskjaer has brought back to the club after relations within the camp hit rock bottom under Jose Mourinho.

I’m sure the fine — however much Maguire paid — didn’t break the bank.

Matic is one of the players in the dressing room who knows what it takes to win the Premier League. Even though he doesn’t play regularly anymore, I still feel he could have a massive contribution in whatever we do between now and the end of the season.

Read more: How Manchester United are marking the 63rd anniversary of Munich